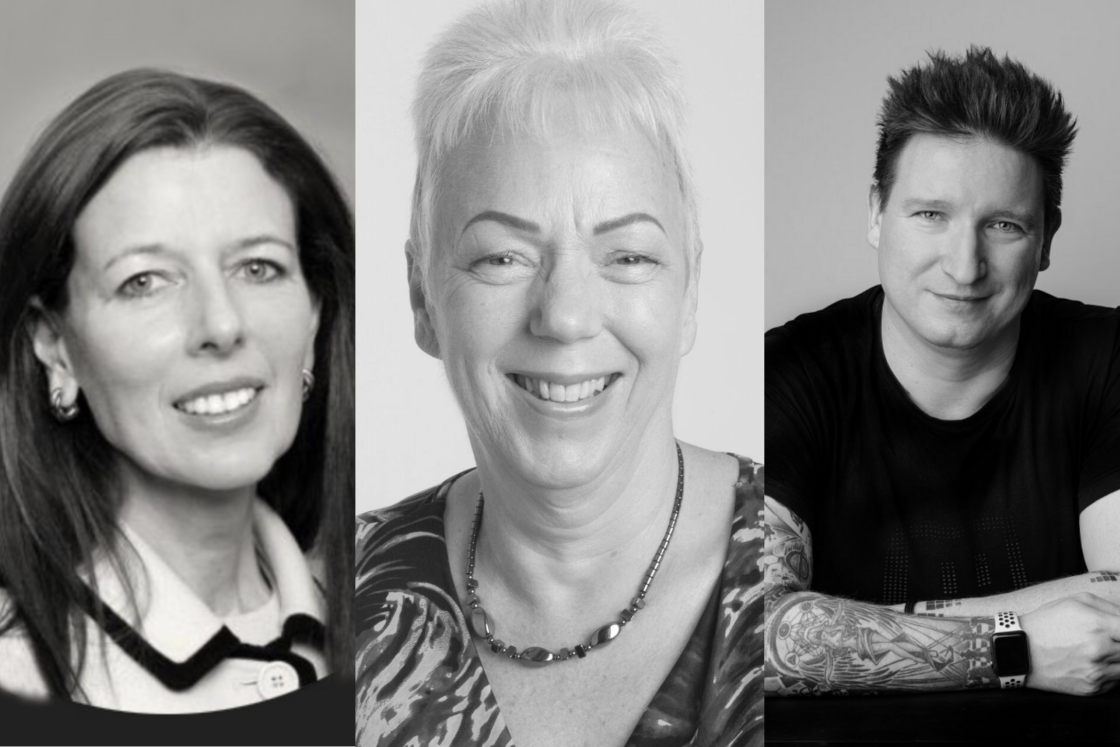 Following our first online panel discussion, we invited some of the brightest minds in mental health to join our host Rob Brown and AccountancyManager CEO, James Byrne.

As Rob reflected in his closing comments – “It’s been a bit vibrant and edgy and we don’t make any apologies for that, because this is life.”

Andrew Salkeld has two introductions. As we all do, if we’re honest.

First, he is a chartered accountant. He trained at PWC and specialised in corporate finance. “I worked on millions of pounds of transactions across the world,” he says “then I left practice, moved into industry and specialised in business intelligence.” Andrew is now an investor, co-owner and director at a small startup in Leeds.

“…And that all sounds pretty good, doesn’t it?” he admits, “Sounds like I’ve got it all sorted?”

Then comes introduction number two. “So my name is Andy. I live with depression. I have been suicidal at three points in my life. I spend most days trying to figure out what happened, how it happened and where I’ve gone wrong.”

Andy was on the partner track after following a life dictated by a familiar external measurement. “You’re born at time zero, start school at four, choose GCSEs at 14, A-levels at 16, become an adult at 18. (I still don’t feel I’ve reached that at almost twice that age.) Buy your first home around 27. Get married at 28. Have your first child at 29. Start your first management position at 30. Start your first leadership position at 42…”

“And I was exceeding them. I was doing more. I was well on track to have that green-lit dashboard. But what happened is, through no choice of my own, through no decision that I made, through no kind of action I took – it fell apart. My life by numbers ended.”

Rock bottom and a turning point

Speaking to us in a t-shirt and shorts, with messy hair and an impressive collection of tattoos, Andy doesn’t strike you as the accountant type. He lists Pokemon, boardgames, festivals and mosh pits as some of his rather ‘un-accountancy’ loves in life. He is a living example of why the boxes we put people – and ourselves – in, don’t work. And how damaging they can be.

“I tried to live for everyone else. I tried to fit in. And slowly but surely, I sacrificed parts of my personality.”

Coming from a corporate finance background, Andy had always been told ‘don’t be emotional, don’t show how you feel’. So, over time, he unwittingly created an unemotional, conformist version of himself. Even to the point of replacing gig going with the golfing green. This persona became baseline for the way he acted, thought and behaved. Paired with his depression, this led Andy down a dark path.

“I stopped having emotions, stopped feeling anything. That, combined with my depression, just left me feeling like a husk of a human being.”

Andy hid his true self away to an extreme degree but his story is a warning to us all. A stark reminder to not let the status quo govern our lives or compare our journeys with those of others.

“There is no way to make a happiness investment now, for it to pay off in the future. You’re much better finding it in the present.”

Read more about Andy’s life in his book: Life Is a Four-Letter Word: A Mental Health Survival Guide for Professionals

Dr Helena Boschi is in high demand right now and for good reason. A world-renowned psychologist specialising in applied neuroscience, she is well-placed to help us make sense of our current situation – and how our minds are reacting.

Helena explains that the human brain simply isn’t designed for our modern world, even before the pandemic. The quarantine situation, lack of contact and ongoing uncertainty have confounded the problem, leading scientists to anticipate a second epidemic – one of the mental health issues.

“The WHO had predicted that by 2030 depression would become the world’s number one illness. I think because of what’s happened recently, that will now become sooner.”

Meet your vagus nerve. It’s your biggest, longest cranial nerve and it carries signals from your gut to your brain. Helena explains that how your vagus nerve is functioning affects your anxiety levels, digestion, weight, moods… it’s basically a big deal. The good news is, we can get to our brain through our gut or ‘microbiome’.

Eating healthily is a start, but we should be aiming for as much diversity as we can. A diverse diet increases good gut bacteria, strengthens our immune system and helps to look after this all-important nerve.

Limit your exposure to bad news

Our nervous system is responsible for our fight or flight response, which is on high-alert during periods of stress. Interestingly, the opposite to this response is ‘rest and digest’. Which, now that we’re all experts on the vagus nerve, makes total sense.

The particular culprits are the amygdalae (essential for feeling and perceiving emotions) and the hippocampus (memory storage). Designed to keep us alive, these structures feed off bad news as a survival mechanism.

“The brain is a prediction machine and a bit of a control freak. So we’re using language to try and exert some kind of control. The stronger the language, the more control we feel.”

This is why, Helena explains, we hate uncertainty and are incredibly sensitive to anything negative right now. Her advice is to limit your exposure to the media, whether that’s the news or social media.

Reach out and have a chat

Next on our whistle-stop tour of brain chemistry is oxytocin. Also known as the love drug or the cuddle chemical, oxytocin is released when we bond – either physically and emotionally – with others. Even stroking a pet will release oxytocin.

“Check in with other people. The sound of a voice helps people feel special, but also helps the dopamine, oxytocin and serotonin levels increase.”

With social contact restricted and anxiety abound, our stress hormone – cortisol – increases, making our oxytocin levels go down. While we can’t see or touch many people at the moment, Helena assures us that the sound of a voice can really help. So maintaining connections with each other is critical.

And don’t forget the curry

Finally, endorphins. When Helena dropped this little gem, I was still trying to spell amygdala and almost missed it.

This demanded a quick Google:

“As the body defends itself against the heat of a hot chilli it releases endorphins, which are the body’s natural painkillers, which leaves you with a “high”, explaining why there are quite so many lovers of painfully hot curries such as the vindaloo and the phaal”

Investigate your own mind, in plain English, with Helena Boschi’s book: Why We Do What We Do: Understanding our brain to get the best out of ourselves and others

Vanessa Ugatti is a motivational speaker, coach and author of the Amazon bestseller True Wealth: How to Charge What You’re Worth and Get It. As the title suggests, Vanessa’s focus lies in helping professionals to take charge and get paid what they’re worth.

“I used to think all professionals had no problems. I saw those people with amazing qualifications, amazing experiences, and I just made the assumption they didn’t have problems.”

It’s not the kind of career people generally set out to have, as Vanessa’s own story shows. It was actually professional advice to find her consulting niche that led her to turn the microscope on her own life.

“I turned the spotlight on myself. And that was a pretty horrible experience because that’s when I understood why I had to help people [with self-worth]. Because I was struggling with it myself.”

Self-worth drives everything we do

Vanessa explains that our idea of our own ‘worth’ is linked to all kinds of patterns of behaviour. Striving for perfectionism, keeping everyone happy and neglecting our own mental and physical health.

“Self-worth is nothing to do with one’s intellectual ability or one’s capability. It’s purely how you’ve learned to see yourself – probably from a young age.”

During times of increased stress, these behaviours are exaggerated. So, Vanessa says, if you usually put others first and don’t look after yourself, this will be even more of a problem at the moment.

“So many people who are really, really good at what they do […] are often very focused on looking after the client, not so focused on the business. And they, themselves, definitely come at the bottom of the pile.”

Put your oxygen mask on first

Vanessa has worked with many accountants since the start of the pandemic and has found that many are extremely busy, dealing with the additional problems that clients have. Not only that, but they’re naturally being sucked into the clients’ emotions.

“It’s incredibly important, of course, to look after your clients, but make sure you’re taking time for yourself. Like they say: put your own oxygen mask on first”

Vanessa’s advice is to stop and think before you start running around too much for people without considering yourself. “I have some clients saying to me that they feel resentful of their clients, even though they’re overservicing them. They’re doing everything for them, but not necessarily balancing the books and not necessarily looking after their own health.”

“You can’t help people when you’re not in a good place yourself”.

Top tips from the panel

Looks like chicken tikka masala and a toblerone for tea, then.