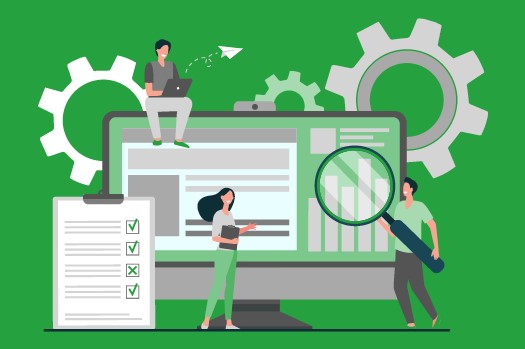 On your free trial of AccountancyManager, we recommend trying out every feature. Once you officially join, it’s all about gradually introducing features. We asked AM users how they’ve approached AM adoption.

When you start looking for practice management software, it’s probably because you want a better way to do something. So naturally, when you start using the software, this is where you’ll begin. But hold your horses!

There are two dangerous routes you and practice could take next. One – trying to implement too much at once and only using the highest-level of each feature. And two – only using AM for those one or two life-saving features that you originally needed. Both these routes lead to the same, unfortunate scenario: AccountancyManager not saving the time it’s supposed to across your business and not providing the value you expect. That being said, we gathered together some advice from users in how to get the best out of Accountancy Manager.

Ease yourself in – don’t try to use everything at once

“Take it step by step,” says Jim Borrill, at DH Tuck & Co. “You don’t have to jump in and use every single feature. See how one feature works and you’ll find the rewards are there when you actually start using it. Then you’ll think, ‘Ok, now we’ll start using this….’ So don’t think, ‘oh I must use everything’, just do a bit at a time. Just dip your toe in.”

“Each module that you implement correctly will give you a 10/10 in that area of your practice. So learn them one at a time and implement them all.” – Buhir Rafiq, Total Books

Ben Thexton, at TAC Accountants, agrees. “I’m only a year into using AccountancyManager and although we do virtually everything through it, I’m aware that we don’t probably utilise it to its full capacity. There’s so much more that the system offers. But I’m a believer in not doing too much all at once. So we’re trying to get the core of the software, understand it completely, and then just start introducing more things.

Dedicate time early on to save masses of time later

Andy Sullivan, at Complete HQ offers software advice to clients along with his accountancy work. For Andy, they are very much combined – the better your systems, the best your business operates, whatever your industry. “One of the things I always say to clients is – ‘systems are amazing but you’ve got to commit that time to set them up, getting them systemised to run your business for you’.”

“People need to realise that software is only as good as what’s being told to do.”

“It’s no good setting up a log in, playing around for it for a couple of hours and then going ‘it’s not doing what that software website tells me it does.’ In reality, you need to commit time to setting things up, set up your templates, set up the automation. Don’t get me wrong, AccountancyManager has got a lot of that set up you can almost do it out of the packet. But if you do want to tweak things, you do need to commit a little bit of time. And it pays dividends, that initial investment of your time pays dividends. People need to realise that software is only as good as what it’s being told to do.”

Ben Steele, at Steel Financial echoes Andy’s sentiments. “Spend a little bit of time making it work because the rewards will be so beneficial. It’s easier to do that when you’re smaller as opposed to when you’ve grown 10 times the size. It all comes down to realising you’re not going to be able to do it all overnight. Do it in small chunks and in six to 12 months, it’ll revolutionise the way your practice works. You’ll have a well-oiled machine, which is doing a lot of your admin for you.”

Decide your immediate priorities, but plan your own adoption roadmap

Every practice is different, so the order in which you start using features depends on your goals and your biggest inefficiency frustrations. However, the central database of all client details (CRM) always comes first and will drive many of the other features. So importing all of your clients is the first step.

Then, you might want to concentrate on getting all your clients registered on the Client Portal. Then, start using the automatically generating Task List to manage your time. We’ve suggested a few steps for your first six months with AccountancyManager, but your list may look a bit different:

Like many AM users, Paul Cain at Cain & Beer, had the Task List and automated reminders right at the top of his list. AccountancyManager uses dates from Companies House to automatically organise client-related tasks around their deadlines. Giving you a constantly updating to-do list. These tasks can be allocated to different staff members and anyone can check the progress jobs at a glance.

Before AccountancyManager, Paul would keep an ongoing list of to-do tasks in his head. “If I forgot it – or forgot to write it on the whiteboard – it didn’t get done and all hell would break loose! The Task Lists solves the problem that we had, which was – I don’t have to remember things anymore! It stops you from waking up in the middle of the night thinking ‘did I do X or not?’

“It’s given me a lot of time back, but I think the key thing here is it’s taken a massive weight off my shoulders.”

With his main pain point alleviated, Paul discovered automated emails which, like the automated tasks, use dates from Companies House to send out emails requesting accounts and records from clients. If these don’t show up, AM will automatically chase your clients. “I like that it sends out emails to the clients or contacts as well. So we can say ‘We need your figures by the 21st so we can get it all together’. It’s given me a lot of time back, but I think the key thing here is it’s taken a massive weight off my shoulders.”

“We’re finding great benefits with the portal – we’re not sending stuff by email, we’re sending it securely by the portal.”

Taking a very different approach, Paddy Quinn, after adding his clients to AM and getting them all onto the portal, prioritised the time tracking feature. “We’re finding great benefits with the portal – we’re not sending stuff by email, we’re sending it securely by the portal. Passports and driver’s licenses and proof of address – all that gets uploaded to the portal as well. And it’s good that client deadlines are on there, so they can go in and see which return is due soon and or what their filing deadlines are that are upcoming.”

“Before using AccountancyManager to track time, we wouldn’t have realised we were spending three or four hours a month with a client when we’re charging for one or two hours. I’ll sit down with the Office Manager and look over the time posted on AccountancyManager each week. What time has been recorded, which clients etc. and that forms the basis for us to have a discussion with the team at the weekly team meetings.”

Don’t put off switching on automation

We get it, handing over part of your working day to a robot is a bit nerve-wracking. Carolyn Cullen at Monton Green Accountancy experienced the same thing, putting off automation for a few months into using AccountancyManager. “At first I was a bit nervous about switching on some of the reminders. But now that I’ve got it, it’s brilliant. Clients respond so much quicker, I get information out a lot quicker. It works really, really, really well. I had thought ‘I’m just going to use it for my work scheduling’ and not use the automation side, but I should’ve switched that on from day one.”

“Clients respond so much quicker, I get information out a lot quicker. It works really, really, really well… I should’ve switched that on from day one.”

“The other automation, which is great, is the tax reminders. I’ve had a couple of clients feedback to me that they’ve really appreciated those. Their previous accountants didn’t remind them of tax and they’d miss tax payments. The accountant would do the corporation tax calculations and say ‘all right, there you go. Your taxes are due in seven months.’ And they’d forget about it, but who’s going to remember that? So those are really good, clients really like those.”

Take a step back to review operations

Many of our users talk about periodically stepping back to see where processes could be improved across the business. When we spoke to Paddy Quinn, he was planning such an exercise. “We’re going to review everything that we’re doing from the moment a client contacts us, to sending a proposal, to the client on board and then doing the actual work.”

“There’s a lot that we’re going to start doing. Using the Xero and AccountancyManager integration for example, then from there, the profitability feature in AM”. Although over half of Paddy’s clients use the portal, this is an area he wants to focus on. “We need to drive more clients to use it – and we could do more too. With the notifications for example. I know you can get alerts when your client makes changes to their details, I want to utilise that more.”