AML and Risk: Inside the mind of an HMRC Tax Investigator 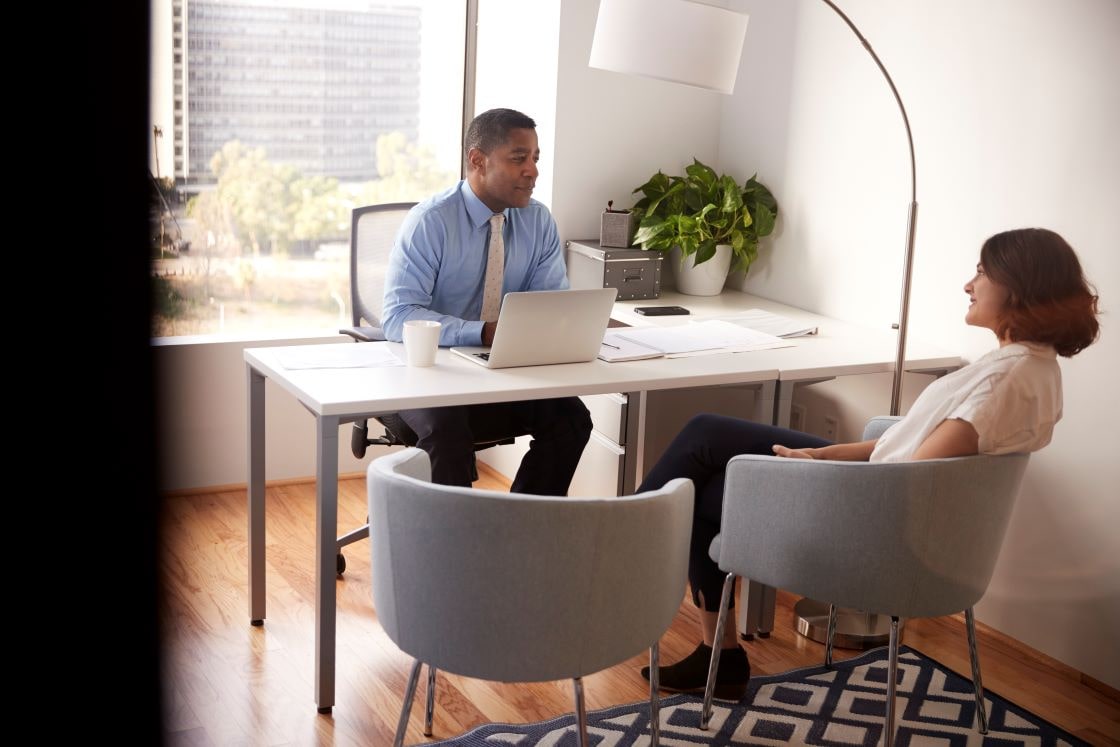 HMRC is a notoriously impenetrable institution. So the opportunity to interrogate a former senior tax investigator was too good to pass up. Turns out it was a rather fascinating three hours.

John Groves is kind of a big deal. A former senior HMRC tax investigator, he spent 45 years at HMRC and for a time worked as the Hidden Economies team liaison manager within HMRC’s Risk and Intelligence Service. John has also been a magistrate and spent nearly 18 months in the East and West Midlands Area working on joint operational work with border force. John now works at an accountancy firm and advises the team at AccountancyManager on all things AML and risk.

Most recently, John has played a key role in designing our updated risk assessment process.
As well as improved usability, AccountancyManager now allows you to complete credit checks for individuals and businesses, store multiple risk assessments and flag them as high, medium or low risk. The suggested information to capture on each client has also been updated.

“Every accountant wants to expand their client base and have an interesting client base. But every client brings their own set of risks.”

John’s passion for risk – and unearthing the truth – is palpable. His stories of tense meetings with fraudsters, tax dodgers and innocent victims of money laundering could easily be the next big Netflix drama. As such, parts of the interview had an ‘off-the-record, please’ caveat.

What you don’t know can hurt you

John made it quite clear that you shouldn’t underestimate the level of intelligence an HMRC investigator is likely to have on your client – before your client gets the dreaded knock. (It often is a real knock. if you’re being investigated and brown envelopes haven’t done the trick, someone like John will come to your door).

“HMRC will build a profile of anyone they might potentially investigate and the systems are quite sophisticated now. They will actually see what connections [your client has] to third parties. So, it’s important that you have that information too.”

“I know I’m sounding a bit like a policeman. But in many ways, you’ve got to think “Is this a legitimate business this person is setting up?” especially if it’s a limited company.”

This is why AccountancyManager’s risk assessments offer a range of fields where you can capture key information. These fields have been designed with John’s guidance: 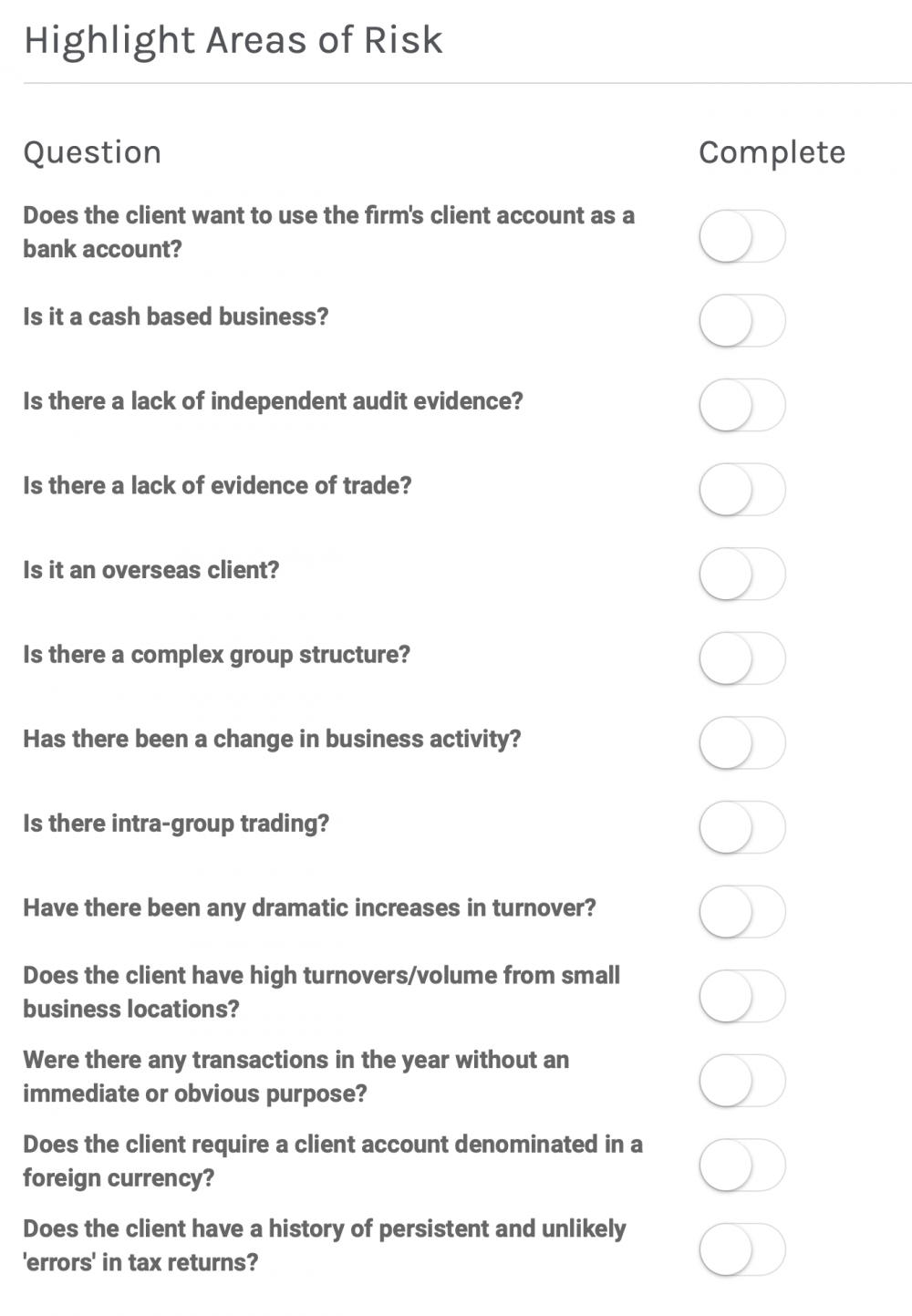 John emphasises the importance of being welcoming to new clients, while at the same time measuring the risks: for the client, for their company and for you – and understanding as much about their business as possible. “Knowing your client and having a good working relationship in terms of both the customer service side and the compliance side, is essential. And I’m sure a lot of accountants, the good ones, will have that.”

Prepare for a second wave of self-employment

John’s career spans almost 40 years. In this time he’s seen a dramatic rise in self employment – and he’s expecting another soon. “The figure at the moment of self-employed people in this country must be in the range of about four to five million people. That is a significant, major factor in financing this country.” (We checked, it was 5 million Oct – Dec 2019).

“When I first started in the service, the kind of people that went into self employment tended to follow in the footsteps of their families. That started to change rapidly in the 80s and 90s. People working for the same company for 10, 15 years were made redundant and went self-employed for the first time.”

“One of the things that will probably come out of this pandemic is not just a reduction in people being employed, but an increase of people going self-employed – because they need work.”

“Some people plan to go self-employed because it’s their ambition, but some are forced down that route. That’s a different kind of client…” John didn’t say it directly (he’s good at that), so we will. These clients may carry a higher risk.

Decide whether a lack of IT skills is a deal breaker

John is a self-confessed ‘late-adopter’ when it comes to technology, favouring a phone call over Zoom for our interview. He readily admits that it’s the likes of him you need to be wary of.

“Check what [the client’s] IT skills are like and whether they’ll engage with it. I don’t pretend to be IT literate, but I’m working with Alex (former HMRC senior district Tax Inspector at Accounts and Returns) and people at AccountancyManager and they’re all really kind and patient. That in itself is a skill.”

“Companies have to develop the personal skills to deal with clients who are reluctant to use technology. Not because they don’t want to, but because they’re a little bit scared.”

“It’s actually taking them through the process so that they build up confidence. It’s having that support mechanism in the background.”

Always question why you’re being brought on

There’s another, more sinister, reason for due diligence at the start of a relationship, as John explains: “From my perspective as an HMRC tax inspector, I’d start an investigation and quite often the person I was investigating had obviously just brought in an accountant or an agent to assist him with the inquiries.

“You quickly find out those agents who seem to keep their distance, know very little and just rely on whatever the client has said to them. Then in parrot fashion, repeat it back to HMRC. And I’d think, ‘So do you actually understand anything about your client?’ I’m just giving you that perspective. It’s really important that the agent, the accountant, understand their client’s base needs.”

Keep an eye on ‘No net liability’ tax returns

A tax return which results in no tax to pay will be a red flag for HMRC – so it should be for you too. John explains, “If you have a tax return where the client has no net liability, the question will arise: What are they living on? What you’re telling the taxman is: ‘Yes, this person is feeding and clothing themselves and their family, paying rent or a mortgage, additional bills like insurance, possibly holidays, probably running a vehicle – all on less than £12,000.’ It’s just not possible.”

“A much harder issue to address, but a main issue around money laundering, is – have they got the means to support their lifestyle?”

Of course, there may be legitimate reasons – a partners’ income for example, but it’s crucial that you ask the question and record the response in your files. “What you don’t want is a compliance check into a client’s tax return where the client says they’ve got no liability and all of a sudden, HMRC are coming up with data on third party information that says, well, this is what your client has got. And you’re sitting there thinking, ‘we didn’t know that’. HMRC will say ‘well, did you ask the question?’”

“It’s not very comfortable for an accountant to be sitting at a meeting with their client and a tax investigator and be given information which they thought never existed.”

Dig deeper into tax returns and flag up high-risk clients

John recommends using the ‘additional information’ box on tax returns to explain any unusual activity or no net liability. Of course, doing all that research in January isn’t ideal, which is exactly why risk assessments shouldn’t just be completed at onboarding, but exist as an ongoing collection of information over time.

To make this even easier, John has advised us to add risk ratings to AccountancyManager. Now, you can flag clients as low, medium or high risk and focus more attention on high risk clients.

Any accountant worth their salt (and licence) will complete anti-money laundering identification checks, credit screens and a risk assessment for all new clients. These are included in AccountancyManager as standard, with both individual and company credit screens.

But as we’ve seen, the risk of money laundering doesn’t just go away after onboarding and remember, it is criminal. HMRC isn’t the only national agency that keeps close tabs, you could end up answering to the National Fraud Intelligence Bureau or the National Crime Agency “Money laundering comes in all shapes and sizes, it can be just somebody asking you to use your bank account to hold money for example” says John. As such, assessing risk shouldn’t be seen simply as a box-ticking activity, but as an ongoing process.

“You need to get things in writing from your client. If you had that conversation, you’d want that recorded and dated as part of your record systems and audit trail.”

This is where the timeline in AccountancyManager plays a part. It acts as an audit trail by capturing and time stamping every email, text and call between you and your client. Any pertinent information relating to risk that arises in your conversations can then be added to your client’s Risk tab on their AM file (private to you).